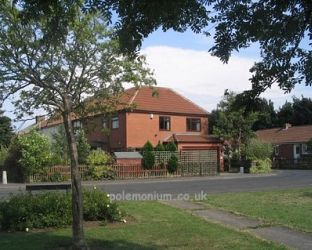 A peaceful village retreat east of Durham city with a double four poster and two single rooms, with an emphasis on organic and home grown freshly prepared produce and a taste of luxury in our range of teas and coffees,home made biscuits and fairtrade organic chocolates. 'Four star luxury that doesn't cost the Earth'

Mention “BedPosts” and the sun will shine :)


It is not necessary to be a student of architecture or a lover of history to be thrilled by Durham. It is one of the most visually exciting cities in Britain. The magnificent Norman cathedral and the castle which form the centrepiece stand proudly on a sandstone bluff almost enclosed, as by a moat, in a steep-banked, wooded bend of the River Wear. It is a scene worth gazing upon from every vantage point. The best views are obtained from the railway station, Prebends' Bridge, South Street, Gilesgate, the south end of Church Street and finally at Palace Green, close up.

The Green, in fact, is a logical place from which to start an exploratory walk along the streets, footpaths and alleys of the ancient town.

The castle was built in 1069 after the North had rebelled against the Norman conquerors. It was sited at the top of Palace Green where it could guard the northern neck of the peninsula. The curfew instituted then still rings on weekdays at 9 o'clock. A small town grew up under the castle walls between two river crossings, Elvet and Framwellgate bridges.

The cathedral was founded as a shrine for the body of St Cuthbert. When Viking raids forced the monks on Lindisfarne to flee in 875, they carried with them the body of the saint. They first found their way to Chester-le-Street and then to Ripon before they reached Durham in 995. Here the coffin became rooted to the ground and the spot for the new shrine was revealed in a vision. This must have seemed a safe place to the wanderers, almost a natural fortress. By 998 they had built their church, of which no trace is left. It quickly became, and long continued to be, a place of pilgrimage. Pilgrims' offerings made the town prosper and enabled the bishops to build on a far grander scale.

Durham's prince bishops had unique powers. They were lay rulers as well as religious leaders. As a palatinate, Durham could have its own army, nobility, coinage and courts. These privileges ended in 1836, though vestiges remain. Around Palace Green are various 15th- to 20th-century buildings which originally housed courts, hospitals, almshouses or residences and most of which are now used by the university.

The present Cathedral Church of Christ and Blessed Mary the Virgin was built between 1093 and 1133 to a plan of Bishop William of Calais. He died and was succeeded in the course of the building by Bishop Flambard, who saw the work completed. This is undoubtedly the finest Norman building in Europe. Only two significant additions were made, both highly successful. Bishop Pudsey built the Galilee Chapel (the Lady Chapel oddly placed at the west end of the nave), between 1170 and 1175. Its roof is supported by slim clusters of Purbeck marble and stone and with its remarkably light, airy feeling gives a quite different impression from the rest of the church. At the opposite end, the Chapel of the Nine Altars, or eastern transept, was added between 1242 and 1280. Here are the pointed arches and richly carved capitals of the Early English style. St Cuthbert's body was brought to his shrine behind the high altar in 1104.

Almost no amount of time is too long to spend in Durham Cathedral and visitors probably will want to provide themselves with a detailed guide, but some of the other features to look for on a first visit may be mentioned here. The impression of strength and antiquity begins with the bronze knocker on the broad Norman north door. The ferocious beast's head has lost its enamel eyes but it still clenches the great ring which gave sanctuary to anyone who grasped it in the Middle Ages. A sanctuary book records that 331 criminals sought refuge here between 1464 and 1524, most of them murderers.

Information for visitors to Durham seeking B&B, hotel or self-catering cottage accommodation; and for accommodation-providers new to this site:

If you seek accommodation near Durham in County Durham you have come to the website of a “club” of providers who offer affordable quality accommodation around UK in hotels, bed and breakfasts, guesthouses, inns, and restaurants plus self-catering cottages and apartments .