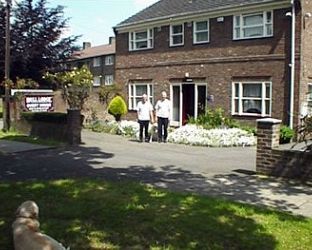 York is known as “The capital of the North”, unique for the completeness of its walls and the preservation of antiquities from prehistoric times onwards, and situated at the junction of the three Ridings of Yorkshire, to none of which it belongs. “Winchester was, London is, York shall be, the finest of the three” is a prophecy of Mother Shipton. “Cair Ebrauc” to the British, “Eboracum” to the Romans, “Jorvik” to the Danes - the titles are an illustration of early history.

William the Conqueror built two castles here, facing each other across the Ouse. The most noteworthy survival on these sites is Clifford's Tower, built in the 13th cent. by Henry III in a quatrefoil plan high on a mound. It was saved centuries later from demolition when the citizens of York pleaded that it was exceeded only by the Minster as an adornment to their city. The rest of the castle has been mainly replaced by the Assize Courts and the Castle Museum, containing among its treasures a reconstruction of a York street in the 18th and 19th centuries.

York Minster is the largest cathedral built in England in the Middle Ages (60,952 sq. ft.). It grew on the site of four earlier churches, taking two and a half centuries to complete after a beginning in 1220; thus it combines the best of the Early English, Decorated and Perpendicular periods. By the orders of Sir Thomas Fairfax after the battle of Marston Moor, the fabric was spared destruction at the hands of the victorious Parliamentarians. The crypt incorporates a pillar of the Roman praetorium and parts of two earlier churches. Among the treasures of the chapter-house are Saxon gospels dating from 982, illuminated missals, and the Ivory Horn of Ulphus presented in 950 by a Saxon nobleman. Of the 125 windows, the E Window and the Five Sisters Window (restored in 1925 as a memorial to the women who died in the 1914 War) are perhaps the best known, but throughout the cathedral are superb examples of the local glassmakers' art in the three periods during which the Minster was built. This wealth of craftsmanship was removed for safety in the 1939 War. This has produced unrivalled opportunities for restoration, and the consequent cleaning, releading and assembly into their original form has brought the windows back to pristine perfection.

The city has many features of architectural interest, and deserves to be explored on foot and at leisure, taking in the great medieval walls and &ldqobars” or gates, the Assembly Rooms and the medieval Shambles, where shops lean precariously across a narrow street. But we must not forget that this is also a modern city, glorying in the past, yet living and thriving in the activities of our time. A good way to see the York city is to walk around the medieval walls that surround it.

Read about the local attractions you will want to visit during your stay in York bandb or hotel accommodation.


In York, outside actvities can include walking the old city walls, taking a free guided walking tour of the city during the day or one of the many ghost walks in the evening, then if the feet need a rest there are river trips day and evening on the Ouse.

As a centre for a longer holiday, we can offer ............
Go East... Experience the North Yorkshire coastline, the scenic fishing ports of Whitby and Staithes, the traditional seaside resorts of Scarborough and Bridlington (don't forget the great British fresh fish and chips!). Within easy access by car are the splendid stately home of Castle Howard, location of TV's Brideshead Revisited, Eden Camp (former POW camp), Yorkshire Air Museum" Flamingoland Park and Zoo, and the pretty town of Beverley with its own ancient Minister. Go North... Enter a different world as you emerge from the Vale of York onto the sprawling and magnificent North Yorkshire Moors - the home of TV's Heartbeat set in `Aidensfield' (Goathland) and James Herriot's All Creatures Great and Small - and no trip would be complete without a ride on the North Yorkshire Moors Railway and a visit to the ancient remains of Rievaulx Abbey. After a surfeit of nature and history visit Lightwater Valley theme park for a perfect contrast.
Go West... Less than an hour's drive is the conference and spa town of Harrogate with beautiful floral gardens. Beyond lies the old market town of Skipton on the edge of the beautiful Yorkshire Dales, home of the Bronte family at Haworth. Visit Holmfirth to the south to enjoy TV's Last of the Summer Wine countryside.

Information for visitors to York seeking B&B, hotel or self-catering cottage accommodation; and for accommodation-providers new to this site:

If you seek accommodation near York in North Yorkshire you have come to the website of a “club” of providers who offer affordable quality accommodation around UK in hotels, bed and breakfasts, guesthouses, inns, and restaurants plus self-catering cottages and apartments .