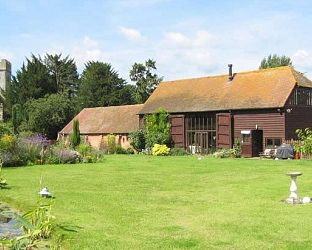 Sommerhay Barn is a Grade 2 listed barn situated next to a 13th century church and the River Wey Navigation in a picturesque and tranquil area of Surrey. Breakfast is provided by our own hens and locally sourced produce. Ideally positioned just 3 miles from Guildford and Woking. Ample off street parking and wireless internet access are available.

Visit Guildford Surrey and the surrounding villages and stay in bed breakfast, hotel or self catering cottage accommodation provided by BedPosts members.

Guildford in Surrey is on the A3 trunk road linking London to Portsmouth. Guildford is well placed in the valley of the river Wey. It's history goes back to Saxon times shortly after the Romans left in 410AD. Guildford Castle was built soon after the 1066 Norman conquest. In the High Street are the remains of the 12th century synagogue probably the oldest remaining one in Western Europe.

The town's architecture is a remarkable marriage of past and present, from the surviving keep of a castle built by Henry II, in Quarry Street, to the new cathedral, in simplified Gothic, which is a conspicuous landmark on Stag Hill, west ofthe town. and to the even newer buildings of the University of Surrey. Abbot's Hospital (founded in 1619) in steep High Street is a group of 17th century almshouses, still inhabited. The Angel Hotel has an old wooden gallery and a coaching yard. Building of the new Yvonne Arnaud theatre began in 1962.

The new Guildford Cathedral stands on Stag Hill, north west of the town. The foundation stone was laid in 1936, but owing to the war consecration did not take place until 1962; Sir Edward Maufe's design, a simplified treatment of Gothic, was accepted as long ago as 1932.

Guildford has a steep main street beautified by the half-timbered Guildhall with its projecting clock (note the nice ironwork and also the buttresses upholding the little balcony, carved like ships' figureheads). On the other side of the street are the remains of the Castle built by Henry II and for a time used as a gaol: the Keep crowns a knoll probably raised by the Romans. Lewis Carroll died in the house called “The Chestnuts” near the Castle in 1898 and is buried in Guildford cemetery (Guildford Museum has some relics).

Loseley House, 2½ miles to the south-west, was built in 1562 with stone from Waverley Abbey. The Elizabethan Sutton Place, 3½ miles north-east, was one of the first non-fortified mansions built in Britain. Clandon Park, with its Palladian-style house, and Hatchlands, with a Robert Adam interior, are both on the road from Guildford t0 Leatherhead.

Find a taxi to take you to and from your Guildford holiday accommodation, b and b or hotel accommodation and other travel arrangements.

GuildfordTaxi.com
We provide taxi services in the Guildford area, and take pride in providing a reliable and professional service. Tel: 01483 905 789

Information for visitors to Guildford seeking B&B, hotel or self-catering cottage accommodation; and for accommodation-providers new to this site:

If you seek accommodation near Guildford in Surrey you have come to the website of a “club” of providers who offer affordable quality accommodation around UK in hotels, bed and breakfasts, guesthouses, inns, and restaurants plus self-catering cottages and apartments .