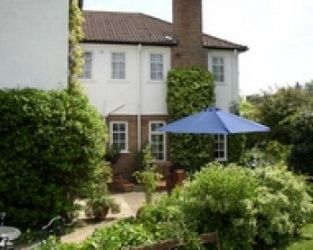 Home Farm Guest House is conveniently located in a small village within a mile of Junction 8A of the M40 and five miles of Oxford City Centre. Relax and enjoy the peace and tranquillity of the 15 acres of the B&B's garden, grounds and lake in Holton, near Wheatley, Oxfordshire.

Mention “BedPosts” and the grass will grow and the birds will sing.

Visit Oxford Oxfordshire and the surrounding villages and stay in B&B, hotel or vacation rental accommodation provided by BedPosts members.

Oxford is one of Europe's most important and ancient universities and, historically and architecturally, a very interesting city. It is also a busy administrative, marketing and shopping centre. With its honey-coloured stones and fantastic spires, Oxford is part of the world's cultural heritage. Factories and houses have sprawled across the suburbs, but the colleges at the heart of the city remain compellingly lovely. Within a single square mile, 653 buildings are listed as being of architectural or historic merit.

The city, originally called “Oxnaforda”, began with the foundation of St Frideswide's nunnery in the 8th century. A university was established by 1214 and by the end of the 13th century, four colleges had been founded: University, Balliol, Merton and St Edmund Hall. In the following century Exeter, Oriel, Queen's and New Colleges were founded. Lincoln, All Souls and Magdalen are 15th century. Brasenose, Corpus Christi, Christ Church (the headquarters of Charles I during the Civil War), St John's, Trinity and Jesus all date from the 16th century; Wadham and Pembroke, from the 17th century; Worcester and Hertford from the 18th century; and Keble from the 19th century. Nearly every college has its lawned quadrangle, its chapel and its hall to which visitors are admitted at stated times, and most of them have valuable collections of pictures and books. Nearly every college is of considerable architectural importance.

There are five women's colleges dating from the end of the 19th century-Lady Margaret Hall, Somerville, St Anne's, St Hugh's and St Hilda's. The most modern colleges are St Catherine's and Wolfson, both founded since the Second World War. St Antony's, Nuflield, Wolfson, Linacre and St Cross are postgraduate. Most colleges are within an easy walk of the High Street, and all the colleges west of a line drawn through St Giles Street, Cornmarket Street and St Aldate's are modern, with the exception of Worcester and Pembroke. Christ Church is the largest and has its chapel the ancient cathedral; Magdalen is arguably the most beautiful; Merton has the oldest surviving buildings; and the gardens of St John's, Trinity, Worcester, New College and Wadham compete for the title of being the most lovely.

Other historic buildings of the university are the Bodleian Library, the Sheldonian Theatre, designed by Wren, and the Ashmolean Museum.

The rivers help to make Oxford what it is. The city is on the Thames but here the great river, known to the Romans as “Thamesis”, is called the Isis. Exactly where the Thames becomes the Isis and then the Isis becomes the Thames again has never been defined. Meeting the Isis just south of Folly Bridge is the Cherwell (pronounced Charwell). Flowing through flat lands, bordered with pollarded willows, the rivers provide marvellous punting, boating, fishing and bathing. From Wolvercote, further north, the Isis meanders through the vast Port Meadow, owned by the city since before the days of the Domesday Book. From Folly Bridge to Iffley Lock the river narrows, and here the college rowing eights train and the “bumps races” called Eights are held. The crew bumping the boat in front moves up a position until it holds pride of place at the ‘head of the river’. May Eights are held over four days in late May, when spectators crowd the boathouses and riverside.

The River Cherwell forms a boundary to the spacious University Parks and there are pleasant walks of less than a mile within the city, through Christ Church Meadow, and along the river banks.

Information for visitors to Oxford seeking B&B, hotel or self-catering cottage accommodation; and for accommodation-providers new to this site:

If you seek accommodation near Oxford in Oxfordshire you have come to the website of a “club” of providers who offer affordable quality accommodation around UK in hotels, bed and breakfasts, guesthouses, inns, and restaurants plus self-catering cottages and apartments .