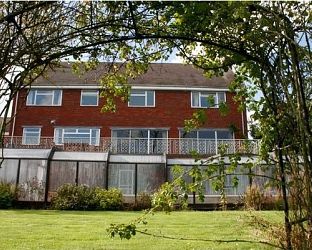 Ros and Anson welcome you to their home in Munslow, enjoying views across the glorious Corvedale countryside to Brown Clee, the highest point in Shropshire. We offer bed and breakfast accommodation in three en-suite bedrooms We have a solar heated indoor swimming pool for relaxing after a day enjoying in beautiful Shropshire country, market towns and historic buildings.

Visit Ludlow Shropshire and the surrounding villages and stay in bed and breakfast, hotel or holiday apartment accommodation provided by BedPosts members.

The approach to Ludlow across the attractive Ludford Bridge and the steep slope of Broad Street gives an immediate impression of the town's mellow beauty. Roger Montgomery, Earl of Shrewsbury, built the massive red-sandstone keep and castle in 1085. Norman, Plantagenet and Lancastrian kings and princes developed, destroyed and rebuilt the castle. Here the two sons of Edward IV were sent for safe keeping until they were taken to their deaths in the Tower of London. Henry VIII's elder brother Arthur came to the castle with his wife, Catherine of Aragon. His death in Ludlow a few months later changed the course of English history. Henry became heir apparent and later married Catherine. The terraced walk round the castle was laid out by Arthur for Catherine. John Milton saw the first production of his masque &lquoComus&rdqo in the castle hall in 1634.

The sandstone Church of St Lawrence has cathedral-like grandeur. Its Perpendicular-style tower dominates castle and town. Most of its graceful interior dates from the early 15th century. The large east window depicts, in brilliant colours, the life of St Lawrence, Ludlow's patron saint. In the churchyard are the ashes of the poet A. E. Housman (1859-1936). Near by is the Reader's House, a medieval building which has Tudor additions and a three-storey Jacobean porch. The town has several ancient inns, including the 17th century Feathers Hotel in The Bull Ring, and the 300-year-old Angel, where Lord Nelson once stayed. There are alleyways with little antique shops, and rewarding walks can be taken along paths by the River Teme.

Information for visitors to Ludlow seeking B&B, hotel or self-catering cottage accommodation; and for accommodation-providers new to this site:

If you seek accommodation near Ludlow in Shropshire you have come to the website of a “club” of providers who offer affordable quality accommodation around UK in hotels, bed and breakfasts, guesthouses, inns, and restaurants plus self-catering cottages and apartments .